It started with one man and a 121hr ambition, this is the story of ICE’s gameathon to end youth homelessness for Welsh charity Llamau 🎮

As with all of our events, we have an exploratory brainstorming session to throw some ideas around and work out what we’d like to do for the event. We had recently received an invitation to take part in End Youth Homelessness‘ (EYH) Gaming For Good two week event to raise money for charities that EYH supports, the local charity we would be supporting was Llamau. With a little time to prep, ICE’s resident gamer, Site & Sales Coordinator Huw Williams and I had a sit down.

This is the story…

The rest of the blog following this section is a bit of a farcical recounting of our gameathon, so first, it’s crucial to talk about why we decided to take part in this event. There was 121,000 young people who faced homelessness in 2020, this number has only been exacerbated by COVID-19 and is a leading cause of mental health problems among young people. EYH asked those taking part in the event if they could raise £121 each, that’s enough to provide home essentials to aid a young person transition into independent living. It’s an extremely pertinent cause, even though the event is over, both charities are always fundraising to support young homeless people. Donate to End Youth Homelessness or Donate to Llamau

Friday afternoon, the ICE boardroom, a Zoom call. With over 45 years of gaming experience between us, Huw was feeling ambitious. Our last gameathon was the 24hr Skyrim marathon for Macmillan in 2019, we raised a fantastic £531 during the event and Huw hosted the entire 24hr stretch.

But how do we top what we did during that 24hr event?

Huw: What if we do five 24hr events that run each day of the week?

Patrick: So, we’d have 12 days to create all the promotional materials, recruit gaming streamers for the cause and to fill all 121hrs, setup fundraising accounts and communicate the event to our audience. And then… actually… do the event….

Huw: Do you think it’s doable?

Patrick: Nope, but let’s do it anyway!

Being experienced gamers, Huw and I are very familiar with extended gaming sessions, we both volunteer to take the first two 24hr stints, that’s 48hrs sorted and we’re still brainstorming!

Huw: We could do a 24hr D&D stream to finish the week out!

Patrick: You got it?

He had it! That’s 72hrs, we’ve got a third of the week sorted, we just need to recruit some D&D adventurers. Huw and I are also experienced D&D players, it’s all coming together.

In the 12 days leading up to the event Huw and I had managed to pull together all of the communications we needed, recruited gaming streamers and D&D adventurers to take on this 121hr marathon event. We set a target of £121 per day, that added up to £605 for the week and 5 ‘move on’ packs as EYH calls them, a bigger goal than our previous event but this event was to be five times as long, the pressure was on, could we do this? 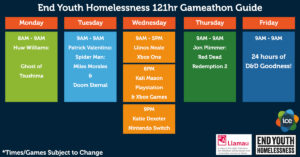 As far as the timing went, we’d done it, mostly, we were definitely going to achieve the 121hrs but would it be consecutive, that would be the dream. It was Katie Dexeter playing Majora’s Mask for 12hrs who threw the doubts in the bin, from that point we were on track for the full consecutive game-filled 121hrs, Huw’s ambition was materialising right before our eyes. Even better, we smashed our goal each day bringing us to a grand total of £2232, over three times our goal and enough for 17 ‘move on’ packs. Whilst all of the streamers and supporters were exhausted, the event was a success and incredibly worth the combined efforts of the ICE community & team. 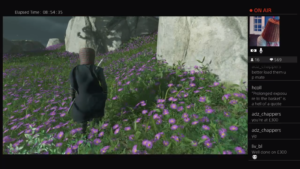 There were so many great moments from taken from our 121hr gameathon, unfortunately some were not captured but experienced live in the moment. However, some of my favourites were captured like:

Let’s bring this full circle, Huw ‘Basket Head’ Williams, the ambitious man with an idea and a drive to make it happen. Without insane ambition there are no 121hr gameathons and for that I give my thanks to you, Huw. 🧡

To ICE Community Manager Llinos Neale, Kali Mason (SugarSnapSEO) and Katie Dexeter (SewScandalous) for carrying us through Wednesday and keeping the dream alive! 💜

To Jon Plimmer (GSD Media) for pushing his body to the limits, streaming for 41hrs of the 121hrs and testing his internal constitution all in the name of fundraising. 💚

To all of our D&D adventurers for staying strong, fighting on for 24hrs and appeasing the God of Impatience. 💛

And finally, to all of our supporters, those who donated and came to keep us company at 2am when our brain power was waning. Without your encouragement and generosity it would have just been Huw and I playing videogames for an unhealthy length of time. We are eternally grateful. 💙

Because what good blog doesn’t have an epilogue? We had a late entry to our 121hr gameathon, inspired by the week’s activities, Connor Davies (KineticPixel) stepped up to our metaphorical stage. Having DM’d the start of our 24hr D&D session, Connor decided to give himself a challenge. A veteran videogame speed-runner (Check out his records), Connor aimed to break a world record, and a world record he did break, twice.

Super Mario All-Stars had a previous time of 1hr 26 minutes, Connor’s time came in at 1hr 9 minutes, smashing the world record, but alas this was not good enough for Connor, he sought to be better, faster and stronger. Spoiler alert, he was all three of those things and immediately broke his own world record finishing off the stream with a 1hr 6m 2s, an incredible feat and all in the name of ending youth homelessness! 🚀