Another Gameathon for End Youth Homelessness 🎮

We had ANOTHER week long gameathon! 🎮

Last year (2021) we had an invitation to take part in End Youth Homelessness‘ (EYH) & Llamau‘s Gaming For Good event for the 2nd year in a row, the first year we put on a 24hr Skyrim stream. Last year resident gamer Huw Williams suggested a week-long, 121hr concurrent gameathon, a lofty goal considering we found out about the event less than a month before it was to take place, but we smashed it & our fundraising goal. After completing this we vowed to do a more elaborate gameathon for 2022, one with more prep, more games, ideally more in-person interaction & less COVID.

Huw & Patrick: “Next year, we’ll be sure to check in with EYH & Llamau to ask when the next gameathon will be, make sure we’re prepared”

Llamau: “Hey, the gameathon is at the end of February, can you take part again?”

Huw & Patrick: “I’m pretty sure you said you were going to ask…”

…This is the story

The rest of the blog following this section is a bit of a farcical recounting of our gameathon, so first, it’s crucial to talk about why we decided to take part in this event. There was 121,000 young people who faced homelessness in 2020, this number has only been exacerbated by COVID-19 and is a leading cause of mental health problems among young people. EYH asked those taking part in the event if they could raise £121 each, that’s enough to provide home essentials to aid a young person’s transition into independent living. It’s an extremely pertinent cause, even though the event is over, both charities are always fundraising to support young homeless people. Donate to End Youth Homelessness or Donate to Llamau

Last year, Huw & I organised the gameathon ourselves, this year, as our goals were loftier, we roped in Marketing Manager Rachel “Jane” Harris and GSD Media’s Jon “doesn’t need to sleep” Plimmer for help. With double the manpower & roughly the same amount of planning time, how could we not achieve our dreams?

But how do we top what we did during the 121hr event?

Rachel: Let’s have a bunch of in-person events, tournament & streams from the Welsh ICE site.

The Rest of Us: YEAH! So, how do we setup all these in-person events & tournaments?

The Rest of Us: YEAH! Keiran can do it!

Huw, Jon & I agreed to stream again this year allowing us to fill up more time. The main enemy we were up against was… other work stuff. Whilst we’d all love to spend our entire week gaming, we still also have to complete necessary work, we’re very lucky that we work for an organisation that allows us to take days off in the name of charity. And as aforementioned Jon doesn’t need sleep.

Rachel: We can do another 24hr D&D stream too!

With an unspecified amount of time sorted, we simply had to recruit other streamers and D&D players, it was all coming together… kinda.

Like last year we set a target of £121 per day, which added up to £605 for the week and 5 ‘move on’ packs as EYH calls them, we smashed this target last year but with more work on our plates, we decided to keep the target the same. 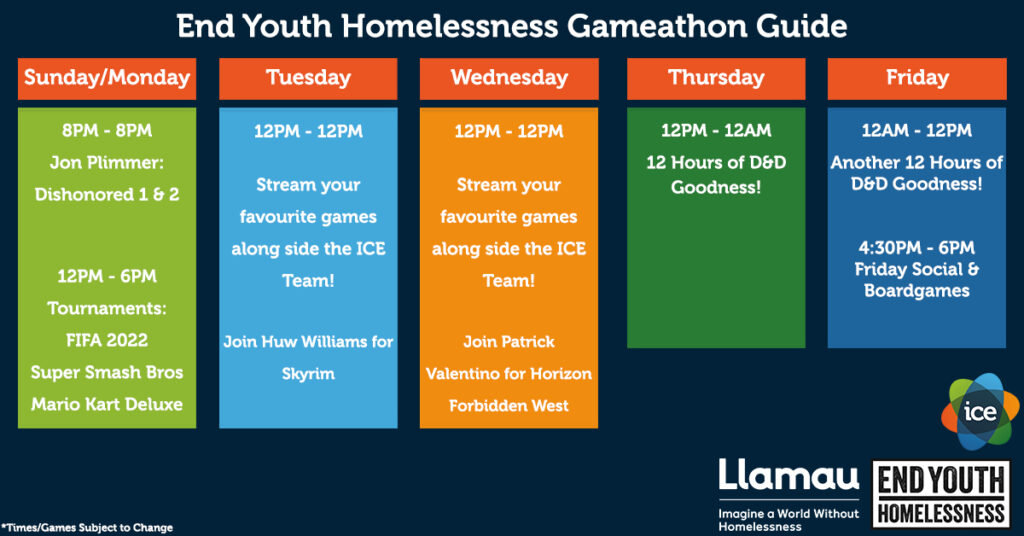 So, the event didn’t go exactly to plan, with the added workloads & an extremely upsetting tech failure at my house meant that my stream was not to be. Thankfully, due to the phenomenal commitment by everyone involved, we still had content going out every day & even better, we still achieved our goal each day bringing us to a grand total of £1345, over double our goal and enough for 11 ‘move on’ packs. Whilst all of the streamers and supporters were exhausted, the event was a success and incredibly worth the combined efforts of the ICE community & team. 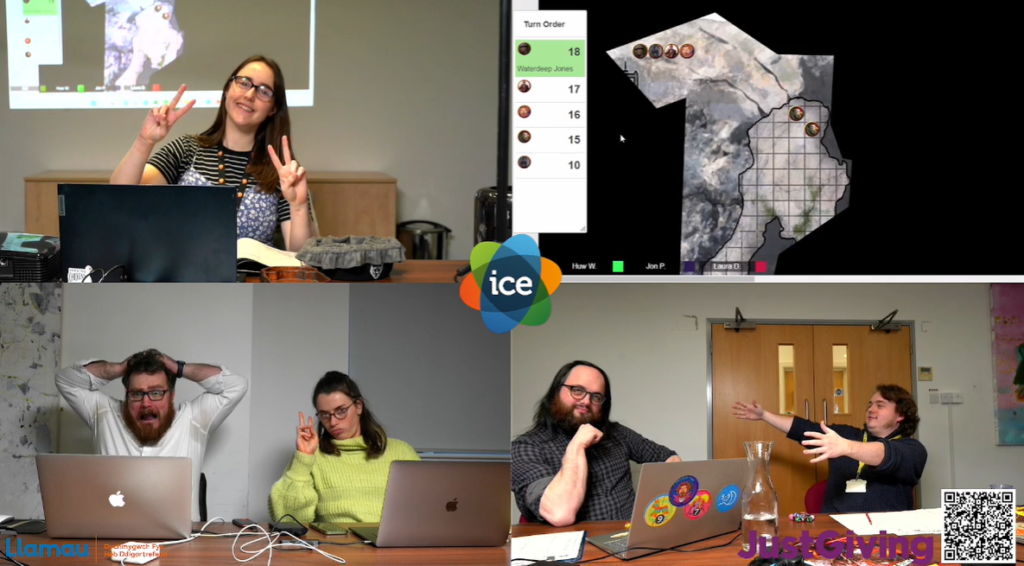 There were so many great moments taken from our gameathon, unfortunately, some were not captured but experienced live in the moment. However, some of my favourite moments were:

Let’s bring this full circle, Huw ‘Beautiful Goblin’ Williams, Rachel “Jane” Harris & Keiran “Helen Mirren” Russell without all your help and insane ambition there are no weeklong gameathons and for that I give my thanks to you all. 🧡

To Jon Plimmer (GSD Media) for pushing his body to the limits, streaming for roughly 48hrs of the gameathon all in the name of fundraising. 💚

To all of our D&D adventurers for staying strong, fighting on for 24hrs and appeasing the God of Impatience. 💛

And finally, to all of our supporters, those who donated and came to keep us company at 2am when our brains were no longer working. We are eternally grateful. 💙

Rachel: “So we’re going to contact Llamau this time and check when the next gameathon is right?”

Huw & Patrick: “Yeah, definitely…definitely, one of us will get to it.”